I found this book written  by british Percy Greg in 1880 (I think), "Across the Zodiac" 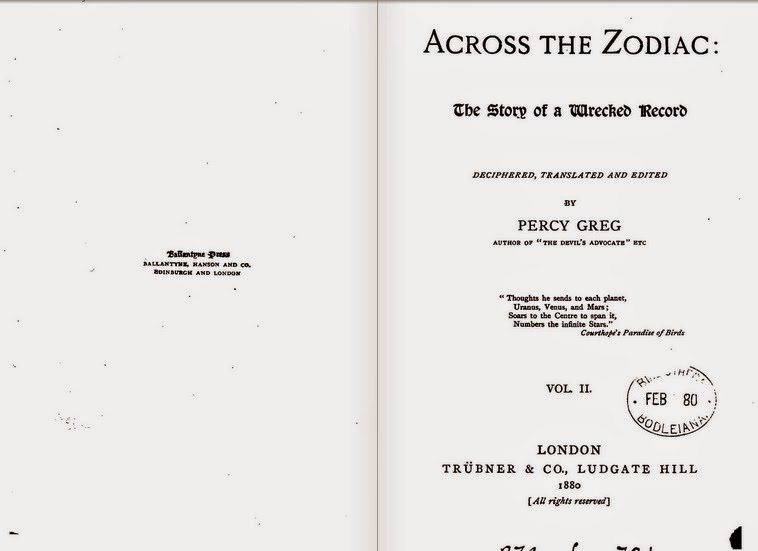 I found four things  interesting (i think):
1) The recurrence of the word Slaves or Slave (15)
2) The occurrence of the word Paradise (4) having in his introduction:
"Thoughts he sends to each planet,
Uranus, Venus, and Mars;
Soars to the Centre to span it,
Numbers the infinite Stars. "
_Courthope's Paradise of Birds_
3) The title of the book is obvious.
4) and the more interesting, in his chapter one is mentioned in a passage that cites cipher (code) built the way the infamous Z .:
.....................
"Colonel A ---- (the reader will learn why I give neither his name nor
real rank) spoke with some bitterness of the inquisitiveness Which
rendered it impossible, he said, to trust an American with a secret,
Very difficult to keep and one without lying. We were presently joined
by Major B ----, who had employed Been During The war in the Conduct of
many critical communications, and had shown great ingenuity in
Devising and unraveling ciphers. On this subject the somewhat
Arose protracted discussion. I inclined to the doctrine of Poe, que
the cipher can be devised Which can not be detected by an experienced
hand; my friends Indicated simple methods of defeating the processes
Which decipherers rely on.

"Poe's theory," said the Major, "depends upon the frequent recurrence
Certain of letters, syllables, and words in Any Given brief language;
for instance, of _and_'s and _T_'s _tion_ and _ed_, _a_, _and_, and
_the_ em Inglês. Now it is perfectly easy to thread introduce abbreviations
for each of the common short words and terminations, and equally easy
to baffle the decipherer's reliance thereon by inserting meaningless
symbols to separate the words; by Employing two signs for the common
letter, or so arranging your cipher que at one extreme Shall without
difficulty know Which marks stand for single and Which is several
combined letters, where one letter ends and another begins. "

After some debate, Colonel A ---- wrote down and handed me two lines in
the cipher Whose character at once struck me the very remarkable.

"I grant," said I, "that These hieroglyphics might well puzzle the more
practiced decipherer than myself. Still, I can point out the event here
Which might help clue detection. There Occur, even In These two lines,
Which three or four symbols, from Their size and complication, are
evidently abbreviations. Again, the distinct forms are very few, and
Been have obviously made ​​to serve for different letters by some slight
Alterations devised upon a fixed rule. In a word, the cipher Has Been
constructed upon the general principle; and though it may take a long
time to find out what que principle is, it affords a clue Which,
Followed carefully Out, will probably lead to detection. "

"You have Perceived," said Colonel A ----, "Which the fact it took me
very long to discover. I have not deciphered all the more Difficult
passages of the manuscript from Which I took this example; but I have
ascertained the meaning of all its simple characters, and your
inference is certainly correct. "

Here he stopped abruptly, as if he thought he had said too much, and
The subject dropped. "
................................
Anyway, I did not get to read the whole book, and I found a version in Portuguese for this. And unfortunately my bad english and translators online leave much to be desired. But as I always say, I share, if anyone has not seen it before. Can be "BS", only perhaps it could be something.
Link to The Project Gutenberg eBook: https://ia700302.us.archive.org/3/items/acrossthezodiac10165gut/10165.txt